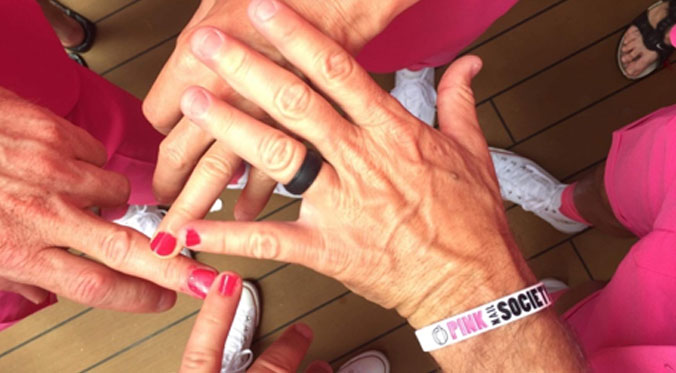 “I wanted to give him confidence, I wanted him to believe he could live on. I knew right there, I just knew I needed to help him. Did I know I would be helping others? No.” -Stephen Tendrich, Founder of Pink Nail Society

On July 4th, 2014, Stephen Tendrich was working as a bartender in Fire Island, NY when he received a call from his father, Donald. During their call, Donald expressed to Stephen that surgery to remove his prostate cancer left him feeling like less of a man. Donald’s battle with prostate cancer was not news to Stephen — they had been dealing with it for several years —  but what was news to Stephen were these feelings his father had.

After their call ended, Stephen reflected upon his father’s worries, and decided to do something that might make his father feel better. “I decided to paint my nail pink and show him, ‘Hey Dad, I’m still a man with nail polish!’” This small act made a large impact on Donald: “It gave him some confidence, he liked it.”

This heartwarming exchange marks the origin of The Pink Nail Society. The Pink Nail Society is now an accredited nonprofit organization that raised over $11,000 last year. A portion of those proceeds go to the Prostate Cancer Foundation to fund prostate cancer research. “It’s the least we can do, because we want research to be fueled. We need that. We need medical research, because cancer sucks,” Stephen said. Their slogan reflects this: “Give Prostate Cancer the Finger!”

Stephen chose pink because it is a color that men are not typically comfortable with. He saw it as a challenge to men to step outside of what is comfortable, because talking about prostate cancer requires just that. “It’s hard for gay or straight men to reveal medical conditions because the prostate is a very private part of your body,” Stephen reflected. “It’s vital to remove the stigma around talking about prostate cancer.

With Pink Nail Society, Stephen Tendrich has managed to do what so many of us who have been affected by cancer strive to do. He has taken a terrible situation and turned it into something positive.

But Stephen never imagined that this is the mark he was meant to leave. “I’ve always wanted to be known for something. I wanted to be a radio personality, I wanted to be in television and acting.” Though Stephen’s hopes to work in entertainment didn’t materialize, he has become a well-known role model and advocate in his own community through his work with Pink Nail Society. “I’m grateful for the Pink Nail Society because it allows me to show the world who I am and why I’m here,” Stephen said. “I think the universe wanted me to be on the pedestal for a cause.”

Stephen’s father Donald now has no detectable cancer, and he and his wife just celebrated 47 years together. Though Stephen is thrilled with his father’s return to health, he has no plans to slow down. “Even though his PSA is at zero, there’s a possibility [that the cancer] could come back,” Stephen said.

As a bartender who talks to men every day, Stephen has also realized that there is still a great need for prostate cancer awareness. “I’ve approached many men who don’t even know what a PSA [prostate specific antigen] is,” Stephen said. In an effort to change this, Pink Nail Society has many fundraising events where men can get their pinkies painted pink and enjoy other fun activities, all in the name of prostate cancer awareness.

Pink Nail Society has also done a fantastic job increasing awareness within the LGBTQ community. Stephen, who is openly gay, has used his many connections to raise awareness amongst a community that is often overlooked in discussions of who is affected by prostate cancer. On this subject, Stephen noted, “It’s not only gay men, it’s transgender male-to-female people as well. People tend to forget that.”

On June 30th of this year, Pink Nail Society will be marching in New York for WorldPride. Thousands of eyes will see their message: Give Prostate Cancer the Finger. This is just the latest triumph in Pink Nail Society’s mission to spread awareness of prostate cancer.

Along Stephen’s journey  — from son who was just trying to help his father regain confidence to founder of a non-profit — he has reached many men. “I can’t tell you how many nails I painted.” Stephen recalled. “I painted Allen Cummings’ nail on Fire Island, he was all about it!”

It is inspiring to see what can come of the love between father and son. Stories like Stephen’s remind us that we do not have to go right for cancer’s jugular to effect change. Working against cancer can start with something as simple as asking someone you love to get screened, creating a donation page for your birthday on Facebook, or even painting your nail pink.

Stephen is thankful for all of his supporters and his partner John. He would like to honor his best friend, Greg Smith, who passed away nearly 2 years ago from leukemia. Greg was the first Secretary on Pink Nail Society’s board and helped pave the way for the organization’s growth and success. Stephen would also like to honor his board members Aaron, Vice President and Zack, the current Secretary who have both been with Pink Nail Society for 3 years. In addition, Stephen would also like to highlight Pink Nail Society’s former Treasurer, Mario, who submitted the paperwork to establish PNS as a nonprofit.

Aaron Gomez is the Video and Content Producer for the Prostate Cancer Foundation. Aaron writes and produces weekly blogs and original videos that work to inform and inspire.

Get The Science of Living Well, Beyond Cancer Guide

Go here to learn more or to get a mailed copy.