In many ways, Russell Clayton’s story sounds like an ideal scenario from a prostate cancer playbook:  In September 2015, Clayton, a doctor himself – he is an Ob/Gyn in Los Angeles – went for his yearly checkup.  He requested a PSA blood test.  “My physician wasn’t going to order the PSA test,” he says.  “I actually asked for it.”

It is not ideal that Clayton, now 57, had to ask for the PSA test – as a man of African descent, he falls into the higher risk group for prostate cancer, and should have been getting regular screening starting in his forties – but Clayton is very glad that he got it.  The elevated number on the PSA test led to a prostate biopsy, which found cancer – Gleason 6, confined to the prostate, very treatable.

“Early screening is the smart thing to do,” Clayton says.  “It helps to be an informed patient.  You have to be proactive.”  He got expert opinions from a urologist and radiation oncologist about what he should do next, and chose to have robotic radical prostatectomy. 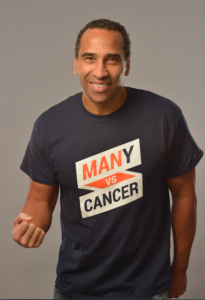 The surgery went well, and Clayton is cancer-free.  But that doesn’t mean that getting here from there was easy; far from it.  “I have no family history of prostate cancer,” Clayton says.  “I felt terrible: shocked, depressed.  I felt, ‘Woe is me,’ like I was going to die.  It was like a minus number on an emotional scale – just devastating news.

“I felt as if my diagnosis was like a death sentence.  I knew I was overreacting, but at the time, that’s just how I felt.  I immediately started hugging my wife and four kids, just not knowing what was going to happen next.”

Being a physician is little help when you are the one with a disease.  “At that point, you just become a patient,” Clayton says. “You suddenly become just a body.”

But Clayton soon rallied and began to focus on positive things, starting with getting through surgery.  “My main concern was to have a safe procedure, but also to have a shot at cure with minimal side effects.  As a man, you worry about urinary incontinence and ED (erectile dysfunction), and you don’t want to be that guy who has those problems.  Fortunately for me, I didn’t have those problems.” Minor urinary issues resolved within a month, “and I didn’t have any ED, so that was awesome.”

Clayton has always tried to eat right and exercise, but after cancer he has made even more of an effort.  “I’ve become just a little more aware of my diet.  I’m drinking more water, reducing the red meat, starches, and dairy products.  I still eat some of those things, just in moderation.”   Yoga helped “to quiet the mind, quiet the negative thoughts that echo regarding cancer.”

The 2019 Patient Guide is here

Enter your email address to get the free pdf

Talking to other prostate cancer survivors – including a good friend, Andy Astrachan, a Board member of the Prostate Cancer Foundation – helped, too.   “You realize it’s not a good club to be in,” but the members support each other.  “Those forebears, the forefathers of the club, the people who have come before you – once you’re able to talk to them, you’re able to climb out of that tree of fear and put your feet back on the ground.  For a while, you just feel like hiding.  You just feel like it’s over, your life is over, you’re never going to be the same.  My mind was consumed with thoughts of death and doom, and leaving my family and children early, and it just simply wasn’t true.”

When prostate cancer is caught early, “the truth is, you’re not likely to die of this disease,” says Clayton.  “Once I heard that from fellow patients, I felt more and more comfortable with each one that I talked to.”  His fear of the side effects lessened, as well.  “Sometimes it’s hard to separate yourself from those statistics.  The truth is… that life can go on.  Most men” after surgery “do not suffer from urinary incontinence, and if there is some degree of ED, there are medications that can fill those gaps.”

Janet Farrar Worthington is an award-winning science writer and has written and edited numerous health publications and contributed to several other medical books. In addition to writing on medicine, Janet also writes about her family, her former life on a farm in Virginia, her desire to own more chickens, and whichever dog is eyeing the dinner dish.
By using this website, you consent to our use of cookies. For more information, visit our Privacy Policy