Like self-driving cars, precision medicine for prostate cancer is no promise of the distant future — with the efforts of Prostate Cancer Foundation (PCF)-funded researchers and others, the prototypes have arrived. The first major precision medicine studies were huge — utilizing “whole exome” sequencing, in which every gene expressed by tumors and normal cells from each patient was sequenced and analyzed for alterations. The results were used to map the landscape of mutations that drive cancer progression and identify those that may be targetable by approved or experimental therapies. In prostate cancer, this effort was largely wielded by the PCF-funded International Prostate Cancer Dream Team, headed by Arul Chinniayan, MD, PhD, of the University of Michigan, and Charles Sawyers, MD, of Memorial Sloan Kettering Cancer Center (MSKCC).

To accelerate the practice of precision medicine, instead of repeating these extensive Christopher Columbus voyage-type studies to map the world of mutations for every new patient, researchers from MSKCC honed in on 410 genes with critical influence in human cancer, either because they have been found to be mutated in previous studies or may be targetable by therapy. They then developed the “MSK-IMPACT” test, which looks for mutations in just this discreet list of cancer genes and can be applied to patients with virtually any type of cancer.

“This is a clinical test that we can do in real time for patients. The results come back in 4-6 weeks, so it is feasible to identify clinically actionable mutations and enroll patients in clinical trials with medicines that target that mutation,” said the 2015 David H. Koch – PCF Young Investigator Wassim Abida, MD, PhD, of MSKCC, who is also part of the International Prostate Cancer Dream Team effort. 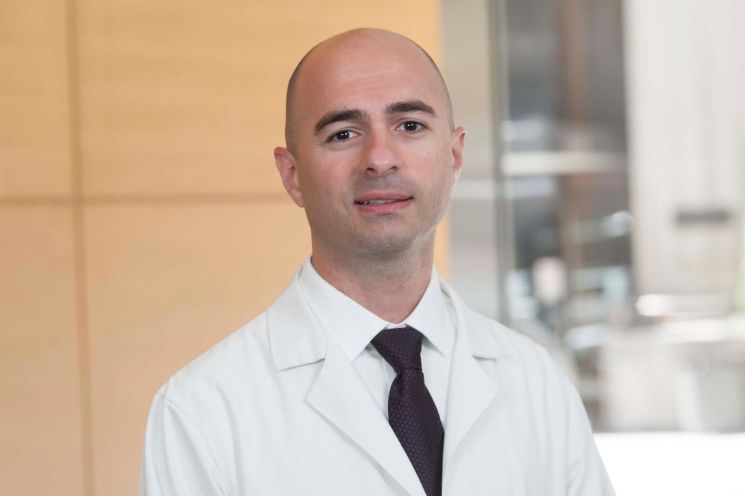 At the 2016 American Association for Cancer Research (AACR) Annual Meeting, held from April 16-20 in New Orleans, Dr. Abida presented results from the application of the MSK-IMPACT test in prostate cancer. Using the test, Abida and team profiled mutations in 276 primary and 228 metastatic tumors from 451 prostate cancer patients. The results from the test were then used to enroll patients onto clinical trials with therapies that target their specific tumor mutations.

The study included a number of patients from whom both primary and metastatic tumors were profiled. This allowed Abida to identify mutations in genes that arose early and persisted in tumors that ended up metastasizing, and may thus act as biomarkers of aggressive disease. Two genes in particular stood out-BRCA2 and p53.

“This is an interesting finding,” said Abida. We are always trying to stratify risk for patients with newly diagnosed disease. We know that alterations in BRCA predict for worse outcomes in patients diagnosed with localized prostate cancer, and this may extend to other mutations, including p53. The next thing we need to do, is conduct clinical trials to determine if upfront aggressive treatments benefit these patients.”

In 140 patients, normal cells were also profiled by the MSK-IMPACT test to identify any inherited (germline) mutations that may have led the patient to develop prostate cancer. Pathogenic germline alterations were identified in 21% of patients in 11 different genes. In 17% of patients, germline mutations were found specifically in four genes involved in the repair of damaged DNA — BRCA1, BRCA2, ATM, and CHEK2.

“Only 3 genes were mutated in two cases or more,” Abida said, referring to BRCA2, ATM and CHEK2. “Most others were single cases and will have to be validated in larger datasets and laboratory models to see if they do confer risk of developing prostate cancer.”

This information is important for two reasons — first, the family members of these patients may need to undergo genetic counseling to determine if they also inherited the mutation and should be screened earlier or more frequently for prostate or other cancers. Hereditary BRCA1 and BRCA2 mutations also increase risk for breast and ovarian cancers. The other mutations may have multi-cancer implications as well.

Secondly, mutations in DNA damage repair genes, which were present at an overall frequency of 30% in this study, having been acquired by tumors in another 13% of patients, are clinically actionable. In a landmark study published last year in the New England Journal of Medicine, patients with prostate tumors harboring mutations in DNA damage repair genes were found to be responsive to treatment with the PARP-inhibitor olaparib (Lynparza®), a therapy that has already been approved for the treatment of breast and ovarian cancer patients with BRCA1/2 mutations in their tumors. In this study, the group of patients with DNA damage mutations were specifically enrolled into trials using DNA damage-targeted agents. The outcomes of these trials will help to create clear paths for clinicians making precision medicine decisions.

“MSK-IMPACT is currently being used for all types of cancer. This test is already reimbursable for other diseases where DNA testing is standard, such as lung and breast cancer,” Abida said.

“We are now able to use genomic testing to at least guide treatment for prostate cancer patients in the research setting, but this will soon will be a standard practice,” he added.

In other words, precision medicine for prostate cancer isn’t just a prototype anymore. It’s here — and way ahead of Google’s autonomous cars.

Dr. Andrea Miyahira has a PhD in cancer immunology, and is Director of Research at the Prostate Cancer Foundation.
By using this website, you consent to our use of cookies. For more information, visit our Privacy Policy